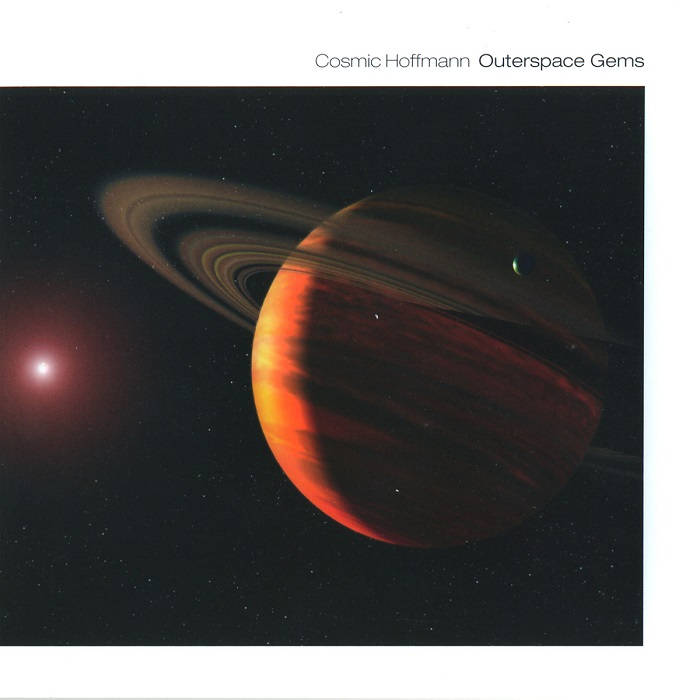 Vintage Rarities of the ’70s and ’80s Vol.2
Those were the days in the ’70s when homerecording my synthesizers and the marvellous Mellotron still meant a cassette or tape recorder. It still was the ’analogue’ pre-MIDI time before thousands of factory presets, computer plug-ins and digital tools appeared. The recorder’s soundon-sound function or primitive tape loops offered us the sought-after echo. Multi-tracking had to be done by bouncing two recorded tracks onto another recorder while playing the overdubs live! Every take was an adventure full of emotions and discoveries. Opening again my archive of electronic music from the years 1978-1985 I hope you enjoy this second edition of spacey gems as much as I did.
Klaus COSMIC HOFFMANN-Hoock

Born in 1951, Klaus COSMIC HOFFMANN-Hoock is a musician who experienced the world of music at first hand. From the early days of the Beatmania, through the mid-60s’ Psychedelia and the wild era of Germany’s ’70s electronic Krautrock ’til today, he has always tried to find his own musical way of expressing his thoughts and feelings with no interest in fashion or hype. Traces of unreleased song material of his archive could be found scattered over his previous CDs. After his ’Space Gems’-CD Klaus opens again his ’magic box’ of handmade spacey gems from the period 1978-1985 for this compilation of original electronic music. Enjoy!

Reviews:
Klaus Hoffmann-Hoock is truly the multi-instrumental master of the Euro electronic and progressive music scene. Since his Mind Over Matter LP debut in 1991 on Klaus Schulze "Innovative Communication" label he has produce some 20 albums + several DVDs that feature some of the most evocative and exotic fusions of guitar, electronic and ethnic music you'll hear made by anyone, anywhere. Cosmic Hoffmann is one of the creative personas he works under to produce electronic, spatial music, and OUTERSPACE GEMS is one of a series of albums he's produced featuring his purely electronic music recorded that flashes back to the golden years between 1975-1985. If you want to hear classic "cosmic
electronics" this is it, in all it's glory. The nine tracks here combine to take you on a 60 minute trip into the synthetic cosmos beginning with "Up to the Stars" and ending with "Black Hole Magic". You will get mentally swept away by the swirling electronic sound waves and even physically tweaked by "Cosmic Cha Cha". The very cool music and vibes aside, it is simply great to feel transported back and remember the time when music and the people who made it did not simply repeat a formula, but played music which flowed from their uniquely individual moments of inspiration. Today it sounds and feels like a breath of fresh air...
Archie Patterson, www.eurock.com

This CD from 2008 offers 61 minutes of spacey electronic music. The tracks consist of vintage rarities from 1978 through 1985. Cosmic Hoffmann is Klaus Hoffmann-Hoock. Joining him on this release are: Horst Theis (on ARP) and Peter Joergens (on Ovation 12 string). In keeping with the CD’s overall theme, the majority of the electronics display a distinctly celestial flair. The foundational texturals are extremely astral, while the main electronics embody a cosmic sensibility. Everything is superbly harnessed and applied to engaging melodies that celebrate astrological phenomenon. Expanding nebulas are given billowing voices through expansive tonalities; naked singularities resound with introverted harmonics that collapse in a glorious fashion. Keyboards are utilized to goad the raw electronics into sweeping melodies, crafting atmospheric tones into looping chords of alluring character. Pulsations of a lower sort serve to ground the songs, providing the listener with familiar vantages while the tunes soar far beyond our own solar system. While tantalizingly adept with synthesizers, Hoffmann is also a master of space guitar. Cosmic riffs spill from his strings to reverberate with visceral strength, their wails lending a gutsy edge to the otherwise dreamy music. In one piece, pleasant strumming accompanies heavenly chorales to achieve a transcendental state. Percussion is present in one track, but the rest of the music flourishes without rhythmic support, flowing like powerful streams of ethereal sound through the vacuum of the interstellar void. Do not expect passive gentility, though, for the electronics supply more than enough oomph to elevate the songs into gripping sonic experiences. These compositions fulfill a promise of electronic vigor. While possessing ambient elements, the music is rich with grand scope and emotional stamina.
Matt Howarth, www.soniccuriosity.com

After Space Gems, released last year, Cosmic Hoffmann (Klaus Hoffmann-Hoock) gets back again with another collection of unknowns tracks;20Outerspace Gems. A second release of unedited music composed between the analog years of 1978 to 1985, produced this time on the well known Manikin label. And a little as on Space Gems, this last Cosmic Hoffmann collection of rarities opens with a very boiling title.
The meeting place of a cosmos effervescence Up to the Stars rolls nervously on heavy sequencers which spiral on cascading loops in an overflowing of synths to galactic waves. A heavy track intersected with short intercalates of cosmic semi-atonic music with strident synthesized streaks. Megasun appeases the tempo with an ambient movement swept of heavy mellotron winds. An atonal passage where a synth bores a malevolent fog with fine oscillations which circle with an almost harmonious wandering.
Moreover all the concept of Outerspace Gems seems to be molded to a dark cosmos, spangled of fine melodious bits, thanks to a very poetic mellotron which will recall the beautiful days of tangerine Dream with Phaedra. Titles such as Galaxy Rising, Spacewards, Magellanic Cloud and Cassini Division will enchant space music lovers surrounded by cosmic fluids.Galaxy Rising and Spacewards are pure delights of ambient and gliding music. Cosmic ChaCha bears its name well. A cosmic dance on hopping minim alism sequencer, accompanied by a synth with languorous charms, in a galactic atmosphere. A title as special as astonishing which adds a little life to this dark album which fits the distant galaxies. Black Hole Magic seems out of place with a more lively approach. Acoustic guitar on a floating synth with great cosmic fragrances.
Outerspace Gems is a mainly gliding album, with beautiful melodious insertions. A quiet album, except for Up to the Stars, which brings us closer to the moon, of ourselves with a bit of a dark nostalgia of the 70’s.
Sylvain Lupari from Guts Of Darkness, The French Magazine of Dark & Experimental Music

This is the second release of vintage rarity recordings (1978-1985) from Klaus Hoffmann-Hoock, aka Cosmic Hoffmann, now put out as a pressed cd on the established Berliner-based Manikin label. Retro fans will find lots of their liking here, already set in good mood with the energizing, vintage sequencing and cosmic textures of the 10-minute opening track “Up to the Stars”. The mesmerizing, roaring sound pads of “Megasun” take on a lighter shape as they unfold, followed by the hypnotizing, minimal sequencing patterns and pads bouncing around in “Cosmic Cha Cha”. Mellotron M 400 textures grace the free form, atmospheric “Galaxy Rising”. Although the sound quality of the 12-minute “Spacewards” isn’t always that fancy, it easily takes the listener up to cosmic scenery with its gliding, elevating soundpads and smooth sequencing. The nice synth lingerings and mellotron textures of the free form “Magelanic Cloud” continue to wander through endless space in a quiet manner, after which “Attic Music” offers a portion of static, rather flat-out music that seems to be a bit uninspired. The soft swirling mellotron sonics of “Cassini Division” sure realm in better cosmic spheres, after which “Black Hole Magic” brings things to a nice, soft closure with beautiful Ovation 12-string guitar and airy soundscape magic. All in all, all who love cosmic music and the warm, embracing of sounds of vintage instruments will want to dig this 60-minute album for sure.
Bert Strolenberg, www.sonicimmersion.org