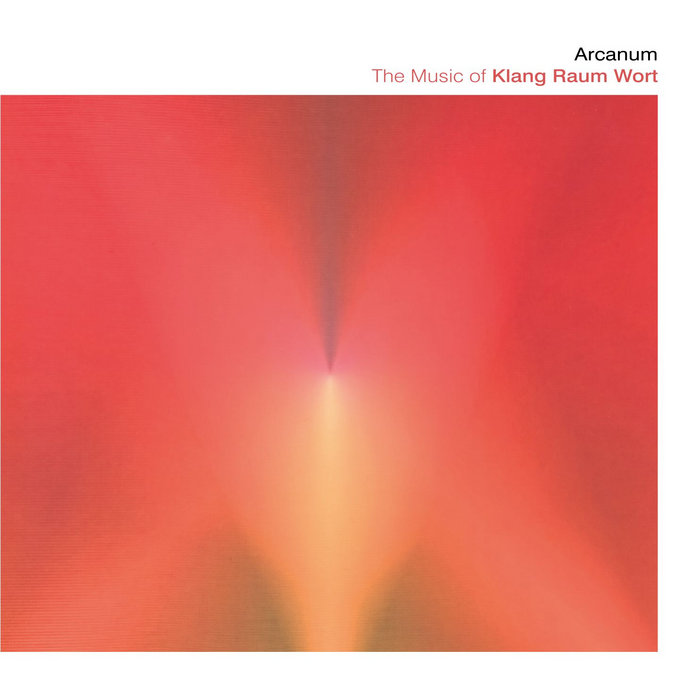 Reviews for Klang-Raum-Wort X:
It's been years since I last heard any of Arcanum's work but if this double album is anything to go by Bernd Braun has established himself as one of Manikin's finest musicians, perfecting a richly-textured, melodic style that, unusually in the current EM scene, oozes feeling. The main feature of disc one is the 63 minute "Livemitschnitt 2003" which, so it seems, was put together over a period of nine years. Split into 11 parts & with various other musicians adding their respective talents there's an obvious religious theme running throughout. The titles "Der Neue Himmel" (The New Heaven) & "Ende Der Tage" (End Of Days) are the most obvious manifestation of this, along with the suitably reverent spoken sections that crop up throughout but the music proves itself to be of the highest quality, starting from the quiet "Part 1 (Opening)" where Udo Mattusch adds his own melodic touches (more of which later). The music thereafter alternatively swells & falls with the presence of Rainer Klein (Otarion) contributing towards the album's highlight in the shape of the triumphantly symphonic "Part 3", a real feelgood piece that, when turned up loud has an almost thunderous quality, great stuff! The sequential opening that graces "Part 4" had me searching the sleevenotes for Keller & Schonwalder's names & although this piece is actually down to Braun, Klein (who between them doubtless account for the fine melodic work), Broekhuis & one Mandy Klinksiek Keller does turn up on the pleasant & tuneful "Part 5" which boasts some fine electric piano work that carries the majority of the piece before eventually giving way to the resonant & serene chords that create a deeply spacious ambience that continues into "Der Neue Himmel" which, in turn gives way to the triumphant "Finale". An appropriately dynamic finish with the combined talents of Braun, Klein, Schonwalder, Keller & Bas Broekhuis (in full-on Harald Grosskopf mode) gelling perfectly to bring this EM opera to a fittingly dynamic conclusion.
In comparison the 10 minute "Konzert 2000" seems to have been tagged on almost as an afterthought & although it does have its moments, not least in the feeling of melancholy that is such an important part of Braun's work it does also demonstrate just how much his music has improved in the intervening period! Disc two is made up of solo offerings from the various contributing musicians, including one from Braun himself with "Satin Whale (Petra's Theme)" where he ably achieves the right mix of mystery & grandeur & even if whale song has been well-used before now it's still effective enough here. Inevitably the Manikin regulars get in on the act, as well with Detlef Keller appearing twice, first with his own "Questionmark" before popping up on Mario Schonwalder's "Am Anfang" on the trumpet, surprisingly enough. I for one never knew he had it in him but it works, making this one of the duo's more memorable pieces from current times. Rainer Klein provides another richly melodic piece that again demonstrates his undoubted talent while Bas Broekhuis' "The Beauty Of The Beast" gets another airing. All of which leaves Udo Mattusch's "Silent Waves" which seems to be aiming for the same grandiose heights of Braun's work but ends up sounding like a typical EM demo (strange as he's worked with Robert Schroeder in the past) although he's obvious got some talent & Mandy Klinksiek's "Ich Liebe Dich" which fails to really achieve any real feelings of romance, partly down to the German lyrics which have never been suitable for such bittersweet love songs as this while the electronics don't really do it any favours either although Klinksiek does have a decent voice that should do well in the right setting.
For all that the album is presented in quite an unusual manner the excellence displayed on disc one in particular makes this worth having. Braun is an excellent & talented musician as this album proves time & time again.
Mick Garlick (Sequences)

As the booklet is in German it is difficult for me to understand but from what I can make out the concept of this disc is a rather strange one. Don't let that put you off however as if you are into gentle melodic music this should fit the bill perfectly. I think the first disc comprises a concert from 2003 with an added bonus of the last track being taken from 2000. The second disc however is basically a Various artists compilation of, as far as I can make out (in all but one case) new tracks by all the artists who were on stage with Arcanum during the concert.
The first disc is made up of six parts with spoken text in German between each part. The First Part gets straight into a steady groove with subtle melodic backing. This really is first-rate stuff, laid back but hitting the spot perfectly. Part Two starts very moodily with slow pads setting the atmosphere, a gentle percussive loop adding a little detail over the top. More beautiful lead lines drift through the ether, the overall result being extremely beautiful though also somewhat melancholy. Both these parts were duos with Udo Mattusch. For Part Three, Otarion (who is present on most of the rest of this disc) replaces Udo. A rhythm starts to form and again the accompanying leads are exquisite. I float along in a blissful trance until the spoken interlude. Bas Broekuis and Mandy Klinksiek join Arcanum and Otarion for Part Four. A staccato sequence bubbles underneath some simply stunning soft pads and fantastic piano lead line. Just before the half way mark we get some rhythmic flourishes courtesy, I presume, of Bas. These add just that little extra oomph but without adversely affecting the exquisite atmosphere already built up. Mandy departs for Part 5 but the piano still conjures up some wonderful melodies. The final part sees Keller & Schonwalder joining Arcanum and Otarion, weaving a lovely syncopated spell with drums and sequences combining perfectly. The pace quickens as we go, the sequences becoming more insistent and melodic all the time, synth flute adding a little softness in the background. The last track on the first CD, from an earlier concert, begins with cosmic twitters out of which a sequence starts to form. The overall feel is restrained and rather moody especially when the lead line enters in the seventh minute.
We open the second disc with 'Silent Waves' by Udo Mattusch. From what I can make out Udo had something to do with Robert Schroeder's superb 'Harmonic Ascendant' album but I'm not sure what! A lovely tinkling sequence is accompanied by ethereal pads. Another sequence is brought into play then the character of the piece changes markedly as a flute comes in. It's as if there is a gentle rain through which the sun suddenly shines casting rainbows in the sky. It's a simply gorgeous, though not remotely twee piece. The magnificent Rainer Klein (aka Otarion) then contributes 'Bach to Earth'. Initially we are right out in the cosmos. Solar flares mix with cosmic winds. Note droplets fall then echo into the distance. Strings add that twist of sadness. The mood lightens with a piano lead line then we get a classic Otarion style rhythmic build up, one drum line being added after another. More lead lines and mellotron then finish things off creating a piece full of excitement and intensity but also beauty. Bas Broekhuis donates 'The Beauty of the Beast'. This was also included on the out of print Limited Edition CD 'Eintrittskarte'. A delicate melodic loop echoes in the air. Around this a slow rhythm forms. It is a nice enough track but maybe a little too subtle for my tastes. Detelf Keller's 'Question Mark' initially creates a feeling of awe and wonder. A slow sequence and percussive loop then increase the pace a little as my head nods gently in time to the music. In the fifth minute another rhythm is added and now my feet start moving as well. It is hardly any surprise with Bas and Detlef providing the previous tracks that Mario Schonwalder should appear next. 'Am Anfang' is initially rather melancholy then we get a brass lead line which put me right in Spaghetti Western mode! It's so moody, but with a rather tense edge. We leave just before the gunfight to move on to a track by Bernd Braun (aka Arcanum) himself.
'Satin Whale (Petra's Theme)' starts with the sound of said creatures and underwater moods. A lovely little flute melody rises from the depths bringing light to the darkness. Subtle percussion is added in the second minute then a tinkling sequence a couple of minutes later. It is a very beautiful track full of melody. 'Ich Liebe Dich' by Mandy Klinksiek is actually a very good piece but I fear will get many SMD fans reaching for the skip button, as it is a female vocal track sung in German. I thought she had a great voice and the synth backing was very nice but if vocals are not your thing then nothing will make you like it. We finish with Digital Mechanics and 'Jilter Frei'. I haven't a clue who they are but given the nature of this album could it be a pseudonym for other artists already appearing here? Whatever, it is a gently rhythmic rather commercial track and a bit more upfront than the majority of the other offerings. Even though this is a far from 'standard' album in concept in contains some beautiful music. I enjoyed virtually all the tracks immensely and so would recommend it.
David Law, Synthmusicdirect, UK

This is a wonderfully unique project, part concept album partcompilation album. Bernd Braun (Arcanum) plays on all tracks on discone, but is also joined by several guests, including Bas Broekhuis,Keller & Schönwälder, Rainer Klein (Otarion), and a couple unfamiliarnames to me, Udo Mattusch and Mandy Klinksiek. Disc one is an epic taletold to music. Upbeat tracks alternate with soft flowing ones, withoccasional dialogue in German. I wish I could understand it, and thebeautiful booklet with extensive liner notes on the players. “Ende derTage” sounds like it could be from Tangerine Dream’s /Le Parc/ until thenarration begins. The talking is extensive at times, normally a put-offfor me as I’ve said many times before. Perhaps since I can’t understandthe words, it is more art than distraction. Disc one runs through avariety of excellent highs and lows, great melodies and wonderfulclassic electronic sounds. Disc two is equally good, as Bernd defers tothe other musicians, letting each one contribute a solo track (includinghimself). Udo Mattusch’s “Silent Waves” is a beautifully laid backopener, with a light bouncy sequence and a strong synth flute lead line.Otarion is next with “Back to earth,” very much in his usual style ofstrong melody and sequencing with a flair for the dramatic.Vangelis-like synth leads conclude the piece. Bas Broekhuis’ “The beautyof the beast” is available here and on another Manikin compilation(/Eintrittskarte)/, relaxed ambient music with a slight lounge flavor toit. Detlef Keller’s “Questionmark” is a subdued piece of night music inKlaus Schulze mode, with lovely sequencing and synth choirs. MarioSchönwälder’s contribution “Am Anfang” is a bit surprising by theinclusion of synth sax, but it really works, blending smoothly into therest of the soft soothing music. The more relaxed feel of disc twocontinues with Bernd’s number, “Satin whale (Petra’s theme),” a romanticpiece that avoids being too saccharin, very pleasant. After a strongshowing through most of the 2-CD set, it unfortunately ends with the twoweakest tracks. Mandy Klinksiek’s “Ich liebe Dich” seems like it wouldbe more appropriate to a Norah Jones record or something of that nature.Digital Mechanics’ “Jitter frei” has a mechanized “do do do, do do do”that makes me think of Max Headroom or a poor imitation of Art of Noise.Skip these last two and you have a very good change from the ordinarycompilation album.
© 2005 Phil Derby / Electroambient Space

Guest hosted by Tamar Osbourn aka Collocutor and Toshio Matsuura.