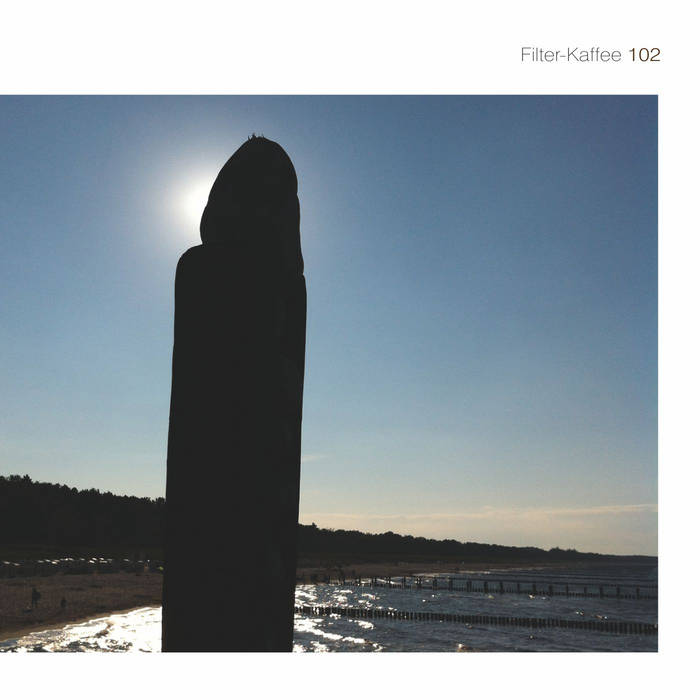 Brian Taylor Love this music - when will we be able to access 101 here on Bandcamp?

After their first CD "101" (released on Syngate.net) this CD is a long trip back into the electronic music of the seventies. A lot of sequences, dark athmospheres and FX.

Filter-Kaffee’s second album “102” came out on E-Day 2015, on which the duo Frank Rothe and Mario Schönwälder also performed parts of it live in concert.
The tasty but short “Intro” hails back to TD’s begin/mid ‘70’s retro-days, followed by the halucinogenic atmospherics, lush mellotron textures and vintage sequencing of “RubyRed” “Sequence A”. These aural spaces (with a occasional slight gothic and darker undercurrent) line up very nicely to classic Berlin School as heard on “Phaedra” and “Rubycon”, but moulded into in a spatial but authentic sound design with occasional minimal flavours.

“Sequence A” follows the same pattern, but the outcome (which also features a contemporary edge) somehow is a bit less captivating. With the 15-minute “Six-Eight Time”, the duo delivers another very nice and moody piece, taking off with melancholic spaces, followed by a fine combo of pleasantly tuned sequences and a smooth soaring solo-voice, at the end winding down with tranquil mellotron realms.

The 22-minute “Darkshift”, the longest piece on the album, is a sequenced, slow unwinding exercise that’s in constant motion, gaining more body along the way (although some of the solo leads in there aren’t that attractive nor effective). The finale (“Outro”) is a short ethereal piece dedicated to the memory of Edgar Froese, who passed away a few months earlier.

I think aficionados of the classic Berlin School should seek out this album despite some weaker moments.
Sonic Immersion © 2022

Filter-Kaffee 102 (77'30") recalls the creation in Berlin of a unique kind of avant-garde. Riding the winds of free expression, this genre paid fresh attention to the human spirit. In the ageless in-the-moment immediacy of this school of experimentation, Mario Schönwälder has again teamed with Frank Rothe to realize an album inspired by the electronic music movement of pre-ambient/techno Europe. Filter-Kaffee 102 grew out of a fascination with the ability of electronic music to facilitate a cinematic yet personal experience in sound. To Schönwälder + Rothe, the synthesizer is the ultimate creative tool to be used toward these ends. With this technology offering a versatile palette of contrasting textures animated by hands-on manipulation, Filter-Kaffee 102 emerges as a free-flight into the wordless. Present in this music are all the syncopated electronic rhythms, haunting melodic lead lines and unearthly morphing atmospheres usually found in good spacemusic. Yet the interplay of light and dark, of colors and textures, speaks of a frontier that is not merely of the vast regions between stars, but in the relationship between inner and outer space - the bridge between the mental and the physical. Fundamentals have a way of asserting themselves. Their Mellotron strings have a fragile glowing consistency, often providing an ominous texture against which the cycling sequencer patterns stand out in bold relief. Prettiness with a tough core, the six tracks acknowledge the physical power of sound without forgoing the chance to stimulate more intellectual responses. In places, a most delicate study of interesting sonic hues, while elsewhere this album turns starkly dramatic. Slowly finding their grip, electronic tone patterns echo and pulse beneath hovering ambient shadows, as commanding melodies flee past shimmering sonic shapes. Schönwälder + Rothe take you away from daylight thinking - to experience things one just does not encounter by day. In this music from the edge of darkness, the night mind surrenders itself to sound - until concluding with a sense of being delivered, at last, to your-self. - Chuck van Zyl/STAR'S END

One of the most prolific artists on the contemporary electronic scene, Mario Schönwälder has teamed up with Frank Rothe to produce this atmospheric and ambient album that is performed entirely on real and virtual analog synthesisers, harking back in sound to the traditional 70s vibe typical of Tangerine Dream, Neu! or Kraftwerk.

The album, another homage to the early german synth pioneers, splits the music into an A-side and B-side. The sound also echoes those early sonic soundscapes as the tracks build up from keyboard riffs as they pulse and dart across the speakers, from the incessant heartbeat that runs through RubyRed whilst synth waves drift across the background like tides hitting a beach.

With nods to psychedelia throughout RubyRed, and a hint of the cacophonous and tumultuous finale from Pink Floyd's Saucerful of Secrets to the metronomic drive of Kraftwerk's Autobahn, this covers over 40 years of electronic music in one sitting.

Sequence A is more akin to the early work of Tangerine Dream, with passages reminiscent of the eerie and at times sinister Zeit, as ominous chords and discordant passages give way to choral effects as the track reaches its climax.

The tracks on here are given plenty of space and room to breathe and evolve, and as is always the way with the best electronic music, these aren't just songs, they are symphonies in sound, flirting with the less-is-more ethos of ambient music, whilst the analogue sounds bring out the warmth that, in the wrong hands, could be cold and processed.

As the closing waves of Outro follow on from the shimmering darkness of Darkshift, you don't realise how immersed you've been in the music until it ends with a sonic pulse rather than an almighty bang.

The immense power and beauty in music of this nature is often hinted at, but some artists are never quite able to realise the potential, here on Filter-Kaffee, both Schönwälder and Rothe show why they are at the forefront of the contemporary German electronic scene.
show video
Conclusion:
James R Turner: 7 out of 10 (DPRP.net)

(“As long as vintage Berlin School genre is between hands as skillful and creative as those of Mario Schonwalder and his friends, its life is protected for years to come”)