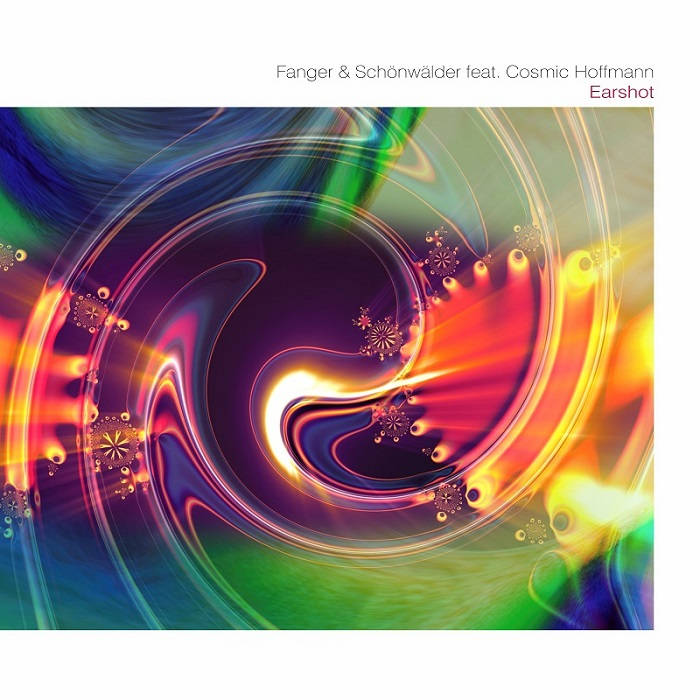 Reviews:
Berlin electronic duo Fanger & Schönwälder is joined by Cosmic Hoffmann on this five-track EP from last year, the title track of which was recorded live at the E-Live Festival on 27th October 2012.

A legend on the German music scene, Klaus Cosmic Hoffmann's guitar and electronic work is well known to all fans of German electronic music, and here, joined with two of its finest contemporary performers, the mix of new and old blood is sublime.

The opener Cosmic features some wonderfully psychedelic and intense guitar from Hoffmann, pulling in riff after riff as the soundscapes, created by Fanger & Schönwälder ebb and flow and build to a crescendo. Their power builds as the track builds, the momentum is like the tide rolling in, and the way that all three work together is fantastic, bouncing off each other and harking back to the days when Tangerine Dream was a real improvisational trio.

In fact the whole collection here is reminiscent of the mid 70s; hommage to the perceived halcyon days of Krautrock. The three-part title track invokes memories of that era, filtered through contemporary performances, and the unparalleled skills of Fanger & Schönwälder and the undoubted talent of Hoffmann.

The guitar and the synth sounds work so well, complementing each other as the track weaves its way into your brain with some fantastic bass lines, some wonderfully spacey mellotron and a driving beat to Part 2.

The instruction to dance on Part 3 is also wonderfully produced, as the beat turns into a fine example of ambient, electro chilled-out dance music. It retains the link to the first two parts, whilst the closing studio track has some fantastic bass work, wonderfully evocative keyboard pieces and more sublime guitar work from Hoffmann.

Listening to this on the headphones is a great way to enjoy this album and get lost in the music.

Fanger & Schönwälder are at the top of their game at the moment, and the way they work intuitively and expressively is a joy to listen to. Their collaboration with Cosmic Hofmann is one that brings out the best in all parties and has resulted in a fantastic record to listen to.

"Earshot" is a 46-minute release presented in cardboard sleeve on which Klaus Hoffmann-Hoock joins the Fanger & Schönwälder tandem for a sonic ride through Berliner School/vintage territory. Next to three tracks recorded live during the Dutch "E-Live 2012" festival, also two fine tracks from studio sessions in winter 2012/2013 are found in here.
Opener "Cosmic" is a smooth, lush-evolving track with psychedelic realms along pulsating sequencing and mellotron-pads, topped by Klaus’ spheric guitar work. However, the tribute of the latter on the three live tracks is mixed far into the background, giving room to moody synth-improvisations carried out in an unhurried manner on the tasty three-fold title piece. Many warm mellotron textures, solo-voices and effects fly by in the spacious framework, along an excellently fitting rhythm in "Earshot part two".
The final part (inviting to dance) is the most energetic, sequenced but also a bit minimal, again with the sound of Hoffmann’s guitar pushed to the background. The outro-track "Mopho me Babe" is another cosmic, gently swinging gem of vintage sounds and a pulsating bass sequence, on which the lush e-guitar licks give the outcome just the right chill-out touch.
All in all, "Earshot" (a Limited Collector's Edition) is almost pleasant surprise, and highly recommended.
Bert Strolenberg, www.SonicImmersion.org

Fanger & Schönwälder! Or the art to revisit the multiple dichotomies of the Berlin School's vintage years. Each new album, or concert, leads the duet towards new summits where we wonder when it will eventually reach a ceiling. And it won't be with “Earshot”. Presented in two halves; a 26 minutes mini concert given at the 2012 E-Live festival and some studio sessions during last winter, “Earshot” shows the art of excellence from the famous duet at digging the old ambiences of the analog years and to reshape them in rhythms closer to techno that those quieter, even if that always remains rather hypnotic, from those vintage years. It's a fight of the styles between Thomas Fanger and Mario Schönwälder where the mediator is no other than the famous guitarist and Mellotron player Cosmic Klaus Hoffmann-Hoock. And like on Analog Overdose 3, his presence brings the music of Fanger & Schönwälder towards another level.
Let's start with the concert. “Earshot” is divided into three different parts where the rhythms follow an upward tangent. "Earshot Part One" infiltrates our ears with dense morphic waves which reveal a pleasant organic fauna. A delicate movement of rhythm spreads hopping sequences which cavort in luminous sonic hoops. The ambiences are carpeted by Mellotron mists and by synth laments from which the spectral coils shape solos strolling and roaming on a rhythm which spreads its wolf steps with more vigour. Everything passes by the ears with "Earshot Part One". We hear percussions of rattlers, riffs and solos of a very discreet guitar glide among the roses of ambience, nicely sculptured here, which quietly smother a rhythm which has always pounded with sweetness. "Earshot Part Two" offers a more emphasized rhythm where are dancing the iridescent mists and sing the fluty charms of Mellotron to the pastoral odes. Both borders of Berlin School come face to face on this structure of rhythm a bit technoïd which inhales the contrariety in the presence of thick Mellotron mists, evasive flutes and threatening reverberations which smother the flow and makes it morphic on a pastel musical pattern. A Kraftwerk style of vocoder introduces us to the rhythm waving such as an anaconda on acid of "Earshot Part Three". This time the trio pushes us in the Teutonic rhythms of the Düsseldorf School with the fragrances of Mythos' Krautrock style and the robotics rhythms of Kraftwerk. Platonic percussions, cybernetics voices, black, feverish and oscillatory sequences; the rhythm flows like a starved zombie strolling beneath blue clouds. We are in a phase of dance music for broken living-dead from which the soft spasms oscillate with violence in an electronic atmosphere eaten away by fickle guitar solos and synth waves more electronic than harmonious. It's different and surprising while staying very near Thomas Fanger's repertoire.
The studio portion of “Earshot” is totally out of this world. "Cosmic (Pre Earshot Mix)" is a deep dark track which waves with the heaviness of its pulsatory synth pads. The beat is heavy. It wriggles like a torrent of decibels trapped in a long tube filled of water. If the synth pads which roll in loops forge the base of the beat, the percussions which tie up to it give it a shaded crescendo which stamps our hearing among mislaid noises of bells and anvils. Lots of noises emanate out of this cosmic fury that the guitar of Cosmic Hoffmann showers of juicy solos and savage riffs which lose a bit of power when wrapped by vaporous mists of a Mellotron which hasn't forgot a thing of its smith's role of morphic ambiences. It's very good. One of the good tracks of rhythmical EM that I heard this year. "Mopho Me Babe (Post Earshot Mix)" is all in contrast and presents a more undecided approach with bass sequences which pulse and skip with tenacity, offering a structure of rhythm that one could compare to a hopping walking with stationary moments. What holds our attention is this fluty Mellotron of which the harmonious fragrances remind of Bali Sunrise, a classic from Mind Over Matter. The rhythm is soft and the harmonies intrusive, like a beautiful summery electronic melody.
When the cosmic rock, Düsseldorf techno and vintage Berlin School couple together, it gives an irresistible mixture where the converging styles marinade in the visions of all and each. It gives “Earshot”; a superb album of an EM which is marvellously astride on the various styles of its writers, giving so a wonderful electronic symbiosis where the art of the conception, the writing breathes of its harmonies. And that it would be thus pleasant that Fanger & Schönwälder becomes Fanger, Schönwälder and Cosmic Hoffmann. It seems to me that all this talent deserves the relevance.
Sylvain Lupari, synthsequences.blogspot.de

This release from 2013 features 46 minutes of powerful electronic music recorded live at the E-Live Festival in Oirschot in the Netherlands on October 27, 2010 (with two tracks from studio sessions in 2012-13).Joining Thomas Fanger and Mario Schönwälder is Klaus "Cosmic" Hoffmann-Hoock. The electronics flourish with ever-mounting authority, growing from timid expressions to boisterous outcries of undulant sound. While a majority of the electronics are triggered and guided by keyboards, a certain percentage belong to the textural realm, establishing ethereal clouds to roil behind the lead riffs. Typical keyboard threads are generated and set to cycle, while additional riffs snake in to interweave with them. Frequently, subdued guitarwork embellishes these electronic pastiches; such auxiliary elements possess a distinctly alien flavor. These union are demonstrably wondrous. Percussives are integral here, synthetic tempos that cascade with catchy character. The rhythms display a sinuous disposition, churning from a vantage immersed in the mix.
Space guitar (in the hands of Cosmic Hoffmann) contributes lofty pinnacles of searing sound. The riffs are powerful as they strain ever upwards, piercing the stratosphere to scald the vacuum with their engaging tuneage. While often submerged in the mix, these guitar spirals frequently surface for instances of crisp dominance before returning to swim amid the gestalt.
These compositions tend to stand alone instead of running together with a seamless flow. They are generally devoid of accreting openings. The melodies manifest punctually and engage in their serpentine progressions and mutations without pause. This results in a more compact, delightful delivery.
Matt Howarth, www.soniccuriosity.com

Does the world need yet another sequencer / synth / guitar album? Listening to Earshot (46'19") by Fanger & Schonwalder featuring: Cosmic Hoffmann the answer is definitely, "Yes". Seduced by the trio's use of rhythm, harmony and melody - fans will find that this music is blessedly a cut above what others in this genre are putting out. The clear influence here is the music of Tangerine Dream from the 1980s. A not so obvious connection is to The Nightcrawlers, another Spacemusic trio who also created significant work in this realm - out of their modest South Jersey garage during the same period. The atmosphere of this music is one that calls attention to a vision of a world transformed by technology. Mellotron string pads swell and expand above skipping TR-808 rhythms. Later an electro voice introduces sweeping phase shifted chords amidst dancing sequencer patterns. Earshot's arranging and sonic organization is top notch, especially the opening studio track. The warm beats and bassline provide a propulsive element with enough power and energy to support the upcoming melody. And it is here that Cosmic Hoffman's heroic guitar leads become so distinguishing. With just the right amount of distortion, echo, and who-knows-what-else, Hoffmann turns a series of well-placed plucked strings into writhing liquid lead lines - with enough force to drag the listener into interstellar space. Earshot opens up a wonder chamber of spacey sounds and cosmic bliss whereever it is played. Although the work of Fanger/Schonwalder/Hoffmann may be compared to earlier works by innovators great and small, every gesture on Earshot, no matter the size or scale, feels uniquely and naturally theirs.
- Chuck van Zyl/STAR'S END