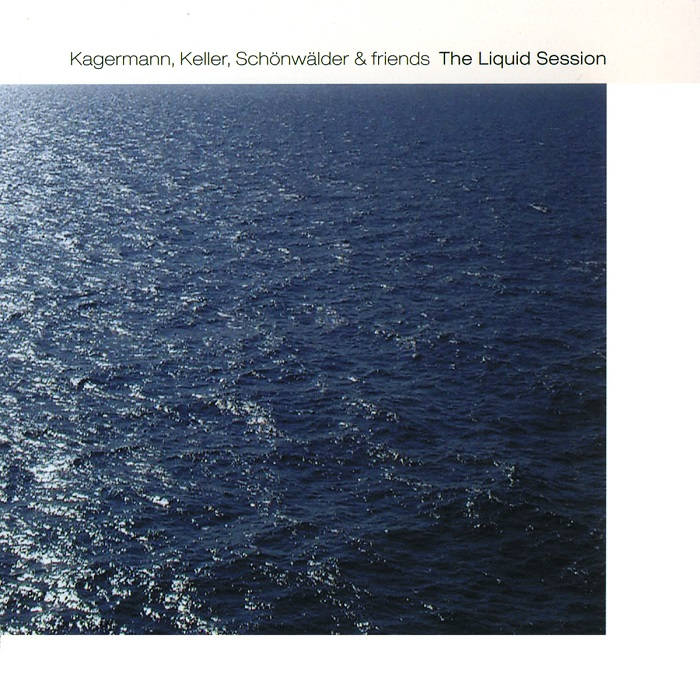 
Reviews/ Feedback:
This release from 2005 offers 56 minutes of calming electronic music recorded live at the Liquid Sound Festival at the Toskana Therme, Bad Sulza on November 8, 2003. Mario Schönwälder, Detlef Keller (both on synths) and Thomas Kagerman (on violin) are joined by “friends”: Bas Broekhuis (on percussion), Gerd Wienekamp (from Rainbow Serpent) and Chris Lang (both on synths), and Andrea Saphira Leonhardi (on ethereal voice).
Employing gradually building strains in an improvisational milieu, the performers generate a distinguished dose of soothing sonics that steadfastly mounts in density and passion. Languid textures coalesce while percussion lurks with subtle presence. Violin drones enter the mix, flavoring the tuneage with a classical edge and injecting a romantic flair with melancholy definition. Vocal intonations enter with the beginning of the second of the three long tracks. The violin adopts a more pensive mood as the sonic flow continues. A particularly fluid sound flourishes while the percussion takes a break. Crystalline chimes season the liquid progression. As the piece reaches its conclusion, the percussion reemerges with slow beats, foreshadowing a transition to an even sparser soundscape. The final track maintains this serenity for a long time, while the violin meanders through the flow like an enraptured gypsy. The piece gains an increasing but restrained tension as the performers forge an enduring covenant of tranquil vigor.
matt@soniccuriosity.com

Liquid Session is a "jam" between Thomas Kagermann,on violin; Detlef Keller , Chris Lang, Mario Schonwalder,and Gerd Wienekamp,on synths; Bas Broekhuis on percussion, and Andrea Syphire Leonhardi on voice. The session took place at the Liquid Sound Festival and is a live recording.The music is divided into three sections, the shortest of which runs at just over sixteen minutes. The sleeve notes say that the synths were all played live without the use of sequencers, so this is a bona-fide jam session with no overdubs.
My overall impression of the music is a blend of "space synths" combined with eastrern tinged world music (this definately the influence of the superb violin playing of Thomas Kagermann), and the ocasional burst of drumming that is not unlike some of the percussive elements that appear on earlier Klaus Schulze albums. Although the album has three tracks it is basically one piece of music that is divided into three movements. The session features spacious synth backdrops overlaid with eastern violin, synth leads, female wordless vocals (adding a Sheila Chandra feel to some parts), the occasional guitar texture (the sleeve notes don't mention anybody playing guitar so it could be real or synthetic, though it sounds quite real to me), and the occasional drum and percussion layer. There is also a bell or chime-like sequence present throughout much of the jam, though according to the CD notes no-one used any sequencers so it may have been played by hand on a synth or by Bas Broekhuis the percussionist.
This is an excellent CD and, being a heady brew of synth and mellotron-style layers and backdrops, coupled with some great but subtle synth leads, some of which have an almost Vangelis feel and sound to them,and of course the omnipresent "eastern" violin playing. This combined with the female voices, drums and other ethnic textures combines in an album of "space-music" that is sufficiently different from the norm, in that it has a world music feel to much of it, whilst still maintaining some common ground, the rhythms being wrapped in a cosmic blanket of synths and mellotrons,If you like the music of Vangelis, Steve Roach, Vidna Obmana, or the violin playing of Hawkwinds' Simon House then you will probably find much to enjoy on this release.
Mick Garlick, Sequences Nr. 31

Maybe it’s just me, but it seems like everything Manikin touches lately turns to gold. The label seems to have slowed down its release schedule this past couple of years, but the quality of each release, from the beautiful digipaks to the music inside, is unsurpassed. That said, it’s no surprise that /The Liquid Session/ is another worthy addition to the fold. The Toskana Therme, an auditorium filled with water, has been the site of many a recent inspiration for Manikin artists, and that is the case again here. A spontaneous gathering including names like Bas Broekhuis, Chris Lang, and Rainbow Serpent’s Gerd Wienekamp culminated in this recording. “Alle Wasser laufen ins Meer” is fantastic, shimmering synth textures melding into hypnotic sequencing (although no sequencers were used!). Thomas Kagermann’s violin accompaniment lends an able hand later on, continuing as the music flows into track two, “Schwerelos,” a moody atmospheric number. Quite understated, it floats softly about as a wonderful vintage synth solo emerges past the midway point, very much like the moog solos on Klaus Schulze’s /Body Love/ CDs. After several more minutes of quiet reverie at the start of track three, it finally picks up the tempo again halfway in, a slow looping synth sound that skillfully complements the other electronics and the violin playing. Strings and female vocals add a touch of melancholia toward the end. What a great disc.
(C) 2005 Phil Derby / Electroambient Space

Dear Mario, I have just bought the Liquid Sessions from David Law at smd. Excellent!!!!!!!
I have not enjoyed a piece of EM so much for a very long time and I have been collecting since 1972!! Any more???
Kindest,
Neil Bowring

Now, if this had have been an AirSculpture album the title would have probably referred to the refreshments taken during the set but as the 'friends' this time comprise the usual Manikin label entourage plus one Thomas Kagermann this is not the case here. Instead it refers to the rather unique properties of the location, the watery Toskana Therme (same inspiration for the Liquid Sounds Vols 1&2 Various artists albums). Thomas Kagermann is a violinist who, on this album, tends to improvise around the lower end of the range of his instrument thus the overall effect is very much like that provided by Wolfgang Tiepold on some of Klaus Schulze's albums, particularly on the resent 'Contemporary Works' outings. Indeed even the electronic sounds chosen and the way they are used throughout the set make this a very Schulzian sounding album from beginning to end- but more of that later.
Deep drones mix with angelic pads creating a lovely serene setting. A delicate little melody is then added providing some focus. A sequence (or loop) enters in the sixth minute, Bas Broekhuis starting up a sympathetic rhythm alongside it. Just before the ten-minute mark Thomas can be heard for the first time, his violin weaving a melancholy spell. It is as we begin the second track however that some eyebrows will be raised as in enter two vocal lines, one male and one female. Now Klaus has also used vocals in his works from time to time and the effect of the male vocal here is indeed similar to some of his experiments. These utterances are fleeting however leaving the string sounds and electronics to meander over a slow four note percussive loop. They return for just a few seconds about five minutes later, the violin combining beautifully with lovely ethereal pads as they go. The female vocal can be heard very faintly again in the eleventh minute (wordless this time) mixing beautifully with the sonic backing.
It's on the bridge between the second and last track however where the vocals did remind me a little of Ernst Fuchs but they are gone before you know it, to be replaced by some more exquisite Tiepoldish backing. This is now incredibly Schulze like; beautiful, beautiful stuff. A little melody fits like a hand in glove with Thomas' playing forming a rhythmic quality all of its own then a synth flute lead line enters combining perfectly with the other instrumentation. In the twelfth minute we get some more light vocal effects, used in more of a percussive manner (looped maybe) than actually singing. Not all Keller & Schonwalder fans will like this album but if you are into Klaus Schulze's more experimental works, as described above, then go for it. It is an album that I personally have had on repeatedly as I work during the day.
David Law, Synthmusicdirect, UK